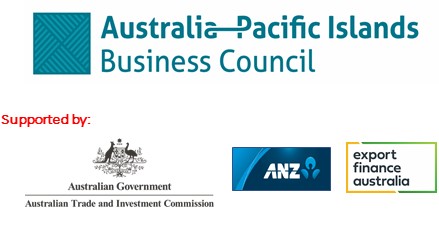 The development of sustainable economic infrastructure provides important opportunities for Australian business to participate in supporting the economic and employment growth in the Pacific islands countries. Australian business participation in Pacific economies provides practical support for the Australian Government’s Pacific Step-up. The two main vehicles for Australian financing of Pacific infrastructure are the Australian Infrastructure Financing Facility (AIFFP) and the infrastructure development program of the Department of Defence.
This briefing program will provide an update for business of the projects in the Pacific which have been funded and those which are in future consideration. AIFFP’s most recently announced transaction on 2 August 2021 involved a $68m financing facility for Airports Fiji and involved AIFFP, ANZ Banking Group and Export Finance Australia. In addition to speakers from AIFFP and the Department of Defence, speakers from ANZ will speak about how ANZ as the major Australian financial institution in the Pacific is well placed to support future well structured transactions to support the development of sustainable economic infrastructure, and Airports Fiji Limited will share with participants what this opportunity means for assisting Fiji prepare for post-covid re-opening to the world.

1110 Mr Rob Jauncey, Chief Investment Officer, Australian Infrastructure Financing Facility (AIFFP), Department of Foreign Affairs and Trade.
Mr Rob Jauncey is Chief Investment Officer of the Australian Infrastructure Financing Facility for the Pacific (AIFFP) within the Australian Department of Foreign Affairs and Trade. The AIFFP was announced by Prime Minister Morrison in November 2018 and became operational on 1 July 2019. It partners with Pacific governments and the private sector to design high impact, safeguarded projects and enable their delivery through up to AUD1.5 billion in loan financing and up to AUD500 million in grants. It has so far announced infrastructure projects in Fiji, Palau, Papua New Guinea and Solomon Islands. This presentation will provide an update on the stage reached in those projects and will provide information on coming projects.”

1130 Colonel Matt Gallagher, International Policy Division, Department of Defence.
Colonel Matt Gallagher has over 30 years’ experience in Defence working throughout Australia and various operations. He is currently the Director of Infrastructure within the Indo Pacific Enhanced Engagement Branch where he is responsible for delivering Defence’s Infrastructure response to Government’s Pacific Step Up initiative. This includes projects in Fiji, PNG, Timor Leste, Vanuatu, Solomon islands, Malaysia and several other Pacific Island countries through the Pacific Maritime Security Program. He has also worked in Defence’s Capital Facilities and Infrastructure Branch developing and delivering projects in Victoria and the ACT. He has had extensive involvement with Government, industry, and international partners throughout his career. His work has been recognised with numerous awards including the Australian Conspicuous Service Cross. Matt’s tertiary qualifications include a Bachelor of Science (Mathematics), Graduate Diploma of Strategy in Defence Studies, a Masters of Business, and a Masters of Project Management. He has also completed the Company Directors Course and the National Security College Executive Course.

1145 Tessa Price, Regional Executive Pacific, ANZ Banking Group.
Tessa Price is Regional Executive Pacific in ANZ Banking Group with responsibility for managing ANZ’s operations in the Pacific islands jurisdictions except Papua New Guinea. Tessa recently played a key role in the financing of a transaction partnership ANZ with AIFFP in supporting the capital works program of Airports Fiji Limited. She will speak here about the role ANZ played in bringing this transaction together and the opportunities available for ANZ to work across the region supporting critical economic resilient infrastructure development to assist the Pacific countries open up post-covid and for the longer term. ANZ has had a presence in Fiji for 141 years, and this funding demonstrates the Bank’s continued commitment to the Pacific.

1240 Concluding Remarks - Ms Sheila Lunter, Pacific Trade Commissioner, Australian Trade Commission.
Ms Sheila Lunter is the Trade Commissioner for the Pacific and Timor-Leste. Sheila has worked with Austrade for over 13 years, including postings to Milan, Italy as Acting Consul-General and Senior Trade and Investment Commissioner and São Paulo, Brazil as Consul and Trade Commissioner. Before joining Austrade, she worked as a Senior Adviser in Government Relations for CSIRO. She collaborates closely with colleagues in the Department of Foreign Affairs and Trade and the Department of Defence to increase the capability and capacity of Australian businesses to compete in the Pacific through bilateral and multilateral major infrastructure opportunities.

Please select the correct ticket when you begin the registration process below.